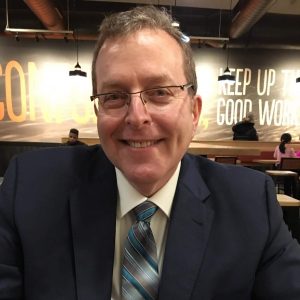 David serves as the Director of Battering Intervention and Systems Response for the New Mexico Coalition Against Domestic Violence. David concluded his 33 years of service at Catholic Social Services of Washtenaw County (CSSW) in Ann Arbor, Michigan, in May 2021 as the Vice President of Programs & Facilities. David has served as the Director of the Washtenaw Child Advocacy Center and the Clinical Director of the Behavioral Health Services department. Also, during these 33 years David served in many different leadership capacities including Chief Operating Officer and a brief time as the Interim President and CEO.

David has been directly involved in the anti-domestic violence movement since 1986 when he founded the ADA Program. He is an Adjunct Lecturer with The Eastern Michigan University, School of Social Work and Concordia University in Ann Arbor, MI.

David is a co-founder and current Chair of the Battering Intervention Services Coalition of Michigan (BISC-MI: https://www.biscmi.org/). He has served on numerous local and state boards and committees. He has conducted trainings in over 20 states and in Canada and has been featured on local, state and national television, in magazines, professional journals and newspapers. David has been an administrative/clinical supervisor and consultant to individuals and programs who have chosen to begin working in the field of battering intervention.

In May 1997 David was appointed by Governor John Engler (Michigan) to Co-Chair the Governor’s Task Force on Batterer Intervention Standards. This project was completed in June 1998. In 1998 David was appointed to the Domestic Violence Benchbook Advisory Committee of the Michigan Judicial Institute. David has served as a faculty member to the Michigan Judicial Institute, the Michigan Coalition Against Domestic and Sexual Violence and the National Council of Juvenile and Family Court Judges.

David was named the 2009 National Association of Social Workers-Michigan (NASW-MI) Social Worker of the Year. David’s work in the movement to end domestic violence was featured in the book Gender-Based Perspectives on Batterer Programs: Program Leaders on History, Approach, Research and Development, by Edward W. Gondolf, 2015.

In 2017 David was awarded the Glenn R. Winters Award (renamed the Nachtigal Award in 2018) from the American Judges Association. This award is given to a “To a non-judge who has made a substantial contribution toward improving the judiciary”. In 2021 David began serving as a partner and technical assistance provider on a project with the Center for Court Innovation and Futures on the Abusive Partner Accountability and Engagement Technical Assistance Project grant from the Office on Violence Against Women.